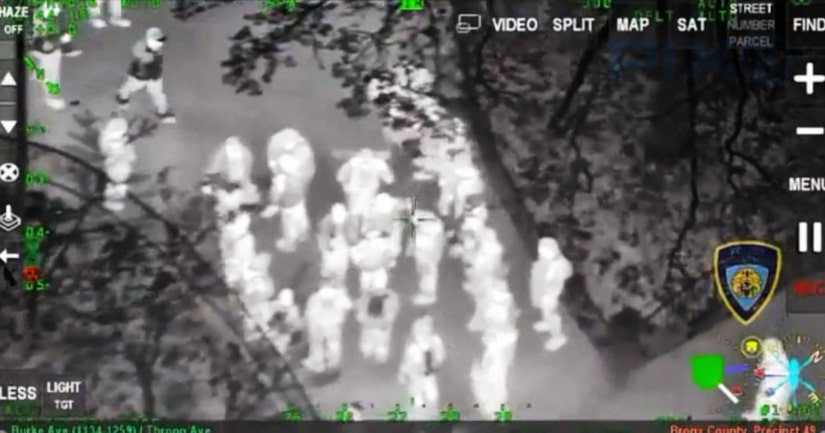 SOUNDVIEW, Bronx -- (WPIX) -- In what's being called a historic takedown, the NYPD, Homeland Security and other agencies have rounded up 120 alleged members and associates of two violent gangs in an overnight raid at several housing complexes in the southeast Bronx.

The raids took place in at least five housing complexes within the 43rd Precinct located in the Soundview section of the borough early Wednesday. It is believed to be the "largest gang takedown in New York City history," according to the Attorney General's Office.

Officials say 88 members were arrested while 30 people are still at large.

During the raid, a man tried escaping from police at 693 E. 236th St., by climbing out of the window. Officers verbally ordered the man to stay inside, but he refused. Unable to support himself from the window ledge, the man fell five stories and died. His name has not been released at this time. The man was reportedly being eyed in connection with a string of robberies.

According to court documents, 63 suspects were members of the Big Money Bosses street gang, also known as "BMB" or the "Enterprise." This group is a faction of "Young Bosses" or "YBz," which operates throughout New York. They operated mainly near White Plains Road between 215th and 233rd streets in the Bronx.

Fifty-seven suspects were members of the "2Fly YGz" street gang, also known as "2Fly" or the "Enterprise." This group is a faction of "Young Gunnaz" or "YGz" gang, which operates nationwide.

Members in this gang committed acts such as narcotics trafficking, robbery, attempted murder and murder.

In addition to the slew of non-fatal acts of violence, members of both gangs are believed to be connected to several murders.