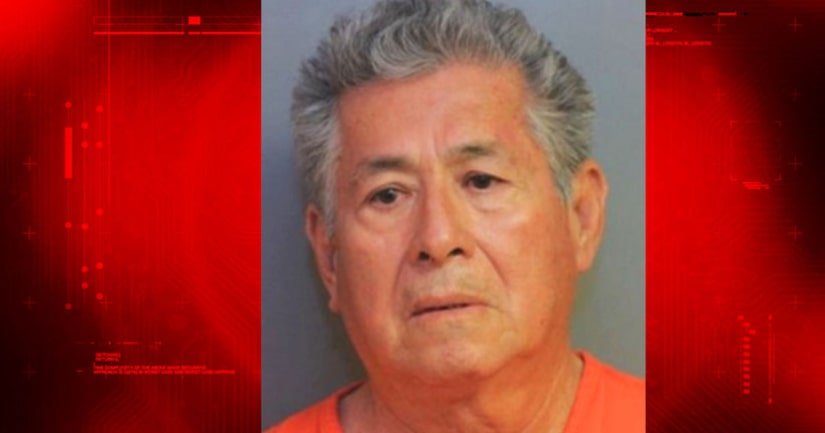 Carlos Ojeda, of Haines City, was arrested on eight counts of sexual battery.

According to the Polk County Sheriff's Office, a student at Horizons Elementary School in Davenport told his school counselor on Wednesday that he saw Ojeda place his hands down two different girls' pants on several occasions on the school bus.

A review of the school bus video surveillance system shows Ojeda on April 8, 11 and 12 standing in the stairwell of the bus while it is parked at the school, motioning to the victim to approach him while showing her a piece of candy, authorities said. Deputies said during each occasion Ojeda would pull the girl toward him, sexually batter her out of the sight of the other students and give her candy and she goes back to her seat.

"There are no words to describe the depravity displayed by this suspect," Polk County Sheriff Grady Judd said. "He drives a school bus, where he has access to these precious children. He lures them with candy, and physically assaults them in such a way that nobody will see it or report it. Together with the Polk County School Board, we are committed to keeping children safe. Thanks to their quick actions in reporting this, we were able to prevent this monster from hurting anyone else."

During a post-Miranda interview, Ojeda told detectives he sexually battered the two girls eight times, according to the Sheriff's Office.

Ojeda was booked into the Polk County Jail and was being held on no bond.

Judd said when Ojeda was arrested, he had candy in his pocket.

An investigation is ongoing, and detectives will continue to interview all of the school children Ojeda had access to and their parents, to identify any other potential victims.

According to the Polk County School Board, Ojeda drove a school bus for three different schools: Bus number 0603 for Horizons Elementary, Boone Middle, and Ridge Community High. He has been employed as a PCSB bus driver since April 2007 and the school board has suspended him without pay.

If anyone has information or suspicions about Ojeda, they are urged to contact authorities.