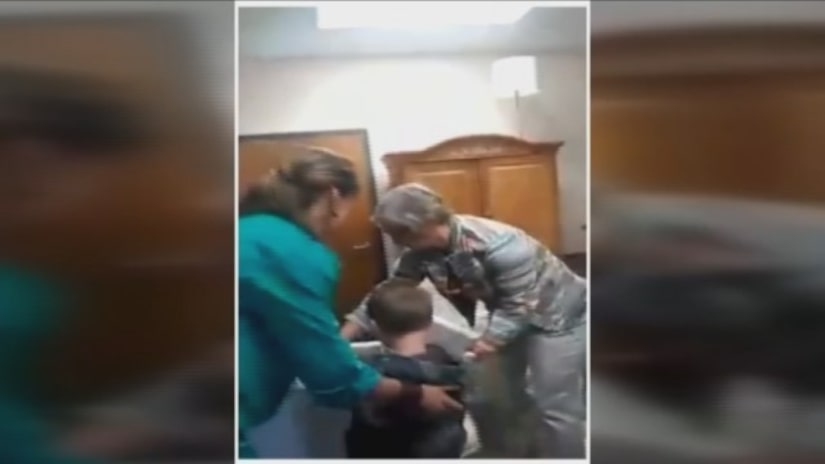 ATLANTA -- (WGCL) -- A mom says she was forced to watch her son get spanked with a paddle in school in fear of being charged with truancy if she pulled him from the school to avoid the spanking.

The incident occurred in Jasper County, which is southeast of Atlanta.

The video shows the young child begging the principal of the school not to spank him, while crying. His mom said she felt intimidated into letting it happen.

"We were leaving. I was about to walk out the door and then I turned around. I got scared. I thought, if I take him home, they're going to get me for truancy," Shana Perez said.

Perez says she had been arrested for truancy earlier this year because her son missed a combined 18 days of school. She claims it was for doctor's appointments.

"They thought it was cancer," Perez said. "I had to go from hospital to hospital, Macon to Atlanta."

The Jasper County Sheriff had a different take on the situation.

"They explored every avenue to help the child before they got to the point where they felt like they needed to paddle him," said Sheriff Donnie Pope.

Pope says Georgia schools have the right to paddle children if they misbehave. He says there's usually a lot of warning in advance and it's not a decision made overnight. He also believes there must be more to the story if the school didn't buy her doctor appointment explanation when she was arrested for truancy before.

"I was not present when she went to the Truancy Review Board, but I feel certain that the board would make any accommodations that they can to try and keep it from becoming excessive," Pope added.

As for Perez' fear that she would have been arrested again if she tried to keep her son from being paddled, the sheriff says that's not something he would have let his deputies do.

Perez has an appointment to meet with school administrators again and she's hoping they come to a resolution where she doesn't have to move out of the district.