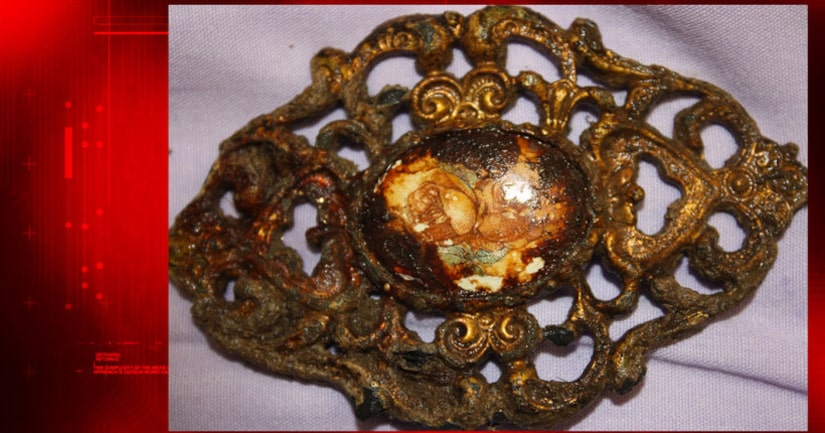 HUNTINGTON TOWNSHIP, Ohio -- (WJW) -- The Lorain County Sheriff's Office held a news conference Thursday morning about the discovery of human remains by a farmer on state Route 58 in Huntington Township on March 22.

Lorain County Deputy Coroner Frank Miller said the body belonged to a white female, who was likely in her 20s. She was probably around 5 foot 2.

Miller said the woman died more than two years ago. Parts of the remains were under 6 to 8 inches of soil, which could be a result of the elements.

A team from Mercyhurst University examined the body. Once back at the coroner's office, it will be sampled for DNA and a facial reconstruction is possible.

There were also several personal items found at the site, a Peugeot watch, metal bangle bracelet, artificial nails with white tips, a metal buckle and a stud earring. She was wearing a spaghetti-strapped top or short dressed, a knit shrug, and matching Victoria's Secret bra and panties.

Photos of those items were released on Thursday and authorities are working with a representative from Victoria's Secret to determine when the underwear were made.

"This is not a typical crime or typical investigation," said Lt. Heath Tester, with the Lorain County Sheriff's Office said the day of the discovery.

Tester said they were conducting tests, including bringing in a team of experts from Columbus to determine how the long the bones had been there.

"At that point, we're going to start looking through missing persons from this county and surrounding counties and starting to put the pieces of the puzzle back together," Tester said, adding that items found near the bones could be used in the investigation.

Tom Jordan found the bones on his property.

Jordan said he was looking at the place where a car had crashed over the weekend near SR 58. As he walked closer, he found that there was a leg bone, tail bone and a skull.

The Lorain County Sheriff's Office is counting on the public's help to identify the woman. Anyone with information should call the office at (440) 329-3742.