UPDATE April 7: Crime Watch Daily has exclusively learned that Elizabeth Johnson is being extradited to her home state of Arizona to face charges related to her probation violations in New Mexico.

Johnson, the woman made famous by the headline-making “Baby Gabriel” case, claimed to have given Gabriel to a couple in San Antonio. Johnson served five years in prison for the 2009 disappearance and was released on probation in 2014.

Fierce accusations and desperate questions are building around the disappearance of Baby Gabriel, a 7-month-old infant who vanished seven years ago.

The adorable baby boy vanished in 2009 after his mother, Elizabeth Johnson, took her son and went on the run. Soon after, she told the child's father, Logan McQueary, that she had killed the helpless baby.

"I said 'What did you do?' and she said 'I killed him. I suffocated him until he turned blue and I stuffed him in a diaper bag and put him in a Dumpster,'" said McQueary.

Days later Johnson was arrested in Florida for kidnapping, but told police the baby wasn't dead at all. She claimed to have put him in the care of strangers in San Antonio, Texas.

Crime Watch Daily is following the investigation into the missing infant as a desperate father exclusively tells us that he is disgusted that Johnson is hiding information while his son's whereabouts remain a mystery.

"I think it's unbelievable that she can just go and hand off her baby to anybody she wants and then just go and live her daily life like nothing ever happened," said McQueary.

Now, in a new development, Elizabeth Johnson has been arrested in New Mexico for violating her probation by taking trips, including one to Arizona.

Crime Watch Daily will have more on this story in the coming days.

Will this innocent baby ever be found?

"Gabriel's out there somewhere and we're still looking for him, but she doesn't care," said McQueary. 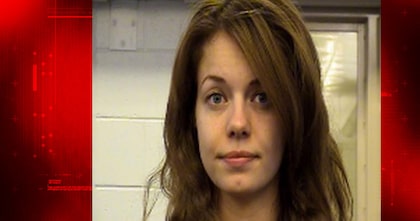