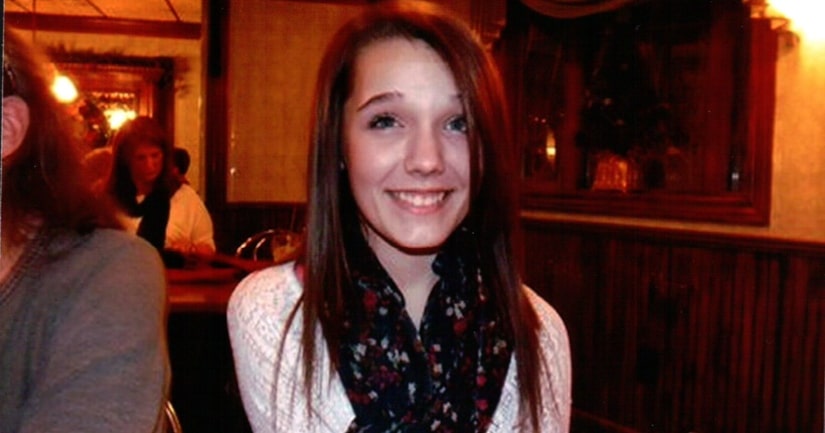 Fourteen-year-old April Millsap is walking her dog when she sends her boyfriend a haunting text. She would never be heard from again. Ana Garcia has more on the search for her killer - and how an app on her phone was a key piece of evidence.

Armada, Michigan, is a small farming community an hour north of Detroit, but a million miles away from Detroit's big city problems -- and its crime.The village of Armada is tiny -- just one square mile -- with a little more than 1,700 people. Its police department is as small as the community it protects.

“Everyone knows each other no matter where you go. Every corner you turn there's a friendly face you recognize,” 15-year-old Maddi Adams, a friend of April Millsap, said.

David Lichtenfelt thought it was a safe place to raise a family.

“You live in a small town 'cause that's how you want to live. You think it's safe there, but it really isn't,” he said.

Life in Armada changed the day 14-year-old April Millsap went missing after walking her dog along a popular jogging trail on a warm summer evening in July 2014.

“April was like my own child as far as I was concerned,” David, April's stepfather, said.

The last time he says he saw her was just before he went to work.

“I gave her a little back rub and she was eating a salad and I told her goodbye. She said goodbye and I got to work and probably 9-9:30 I get a phone call saying that she's missing,” David said.

Jennifer was born with a neurological disorder that affects her speech and balance. But her fear something was wrong was easy to understand.

“That's what concerned me. She wasn't home. She wouldn't take the dog out that long,” she said.

“I told everybody at work, 'I'm packing my tools, I'm leaving; April's missing and I don't know what's going on,” David remembered.

“She's not answering me -- so after the third or fourth text I actually called her. It went straight to voicemail,” she said.

Jennifer called April's boyfriend. He was hanging out with his friends and hadn't heard from her -- or had he?

“Around 6:30 she sends a text to her boyfriend that she is in trouble, afraid she almost got kidnapped. But he doesn't get the text until an hour later,” Ana asked.

“An hour, about an hour later, yes,” Jennifer confirmed.

That terrifying text is the last time anyone heard from April.

Then a man riding a bicycle on the Macomb Orchard Trail spots "Penny," April's dog, loose and frantic. Penny leads the man to April. He calls 911.

By nightfall, most everyone in this tiny, close-knit community has heard that police have found the body of a teenage girl.

Serena Smolarek, a friend of April's, sends a text to everyone in her contact list asking if they are OK.

“I text all my friends, including April, and April is the only one I didn't get a message back from,” Serena remembered.

She wasn't the only one terrified about what this could mean. When April's mother reaches the crime scene the news is not good.

“They described the clothes April was wearing. That's the clothes our victim had on,” said Armada Police Chief Smith.

“When I found out I just, I kind of went numb. I just didn't know what to feel, how to process it,” Jennifer said.

She wasn't alone in her pain. Even Smith felt like he had lost one of his own. This was personal.

“I remember when April was a little girl walking over to the bus stop. I know these families,” he said.

Who would savagely attack and kill a beautiful 14-year-old girl just walking her dog on a warm summer evening?

It was the first murder in Armada in 41 years. The FBI and Michigan State Police were called in to help the village's tiny police department crack the case. The whole town was trying to help.

“Everyone put up ribbons on all the trees and signs in Armada,” April's friend Maddi Adams said, describing the pink ribbons meant to show support for April's mother.

“It's hard for me to speak in front of a camera but I just want people to remember April the way she was,” Jennifer said.

Police say April was approached by a man on a trail while she was walking her dog. He reportedly came on to her, she rejected them and immediately sent a text to her boyfriend that read: “I think I almost got kidnapped.”

Police Chief Smith says he knew right away they were looking for a man in his 30s on a motorcycle who was seen trying to pick up April on the trail.

“We have witnesses that identify April, put her there with the man on the motorcycle,” Chief Smith said.

Based on the time of that text, police used the GPS on April's phone to plot her coordinates on the trail. But police had one more weapon: a goldmine of information that measured April's every step.

“There was a fitness app running on April's phone,” Chief Smith said.

April's fitness tracker would provide investigators with a digital trail of terror.

Investigators recreated April's route. She changed direction and started walking home at a much faster pace -- right after sending that text.

“She was walking away from the assailant when she sent that text,” Chief Smith said.

When April sent her boyfriend the text, she may have thought she was out of danger. Police say she likely never saw the killer come up behind her.

“I think at that moment she believed she was safe,” her stepfather, David, said, adding that he taught April to protect herself.

“I believe that April would have fought back. I always taught her to kick the guy in the right place and run as fast as you can,” he said.

Police say the last few minutes of April's life were violent. The killer hit her on the head with a motorcycle helmet, then dragged her body off the path, ripped her clothes off, tried to rape her and then stomped her so hard his sneakers left tread marks on her neck and chest.

“He stomps her so viciously that the shoe impressions are vivid,” said Smith.

April's phone not only gives cops a step-by-step map of the attack, it also provides investigators with a virtual blow-by-blow image of April's struggle with her killer.

“For about 15 minutes you can see a scuffle. You can see the phone going back and forth and back and forth. And then the phone leaves the crime scene at a speed of 13 miles per hour. So we know it's on a motorized vehicle,” Chief Smith said.

When the killer took off with April's backpack and cell phone, he unknowingly left police "digital breadcrumbs," and cops followed the trail.

Police found the phone the next day. Then the motorcycle was spotted.

“The officers saw a motorcycle on Juanita Ridge that matched James VanCallis's so we started looking at him the second day,” Smith said.

The trail led the FBI to the home of a father and son in nearby Wales Township: James VanCallis Sr. and James VanCallis Jr. The two are originally arrested on unrelated drug charges.

“We did two searches of the VanCallis's house,” Smith said.

James VanCallis Sr. is a registered sex offender convicted of having sex with a person under 13. But he's not the one police want. It's his son, James VanCallis Jr., who's arrested for April's murder.

“James made a comment at the original search warrant that everything he learned he learned from his father. His father nodded and that was the truth,” Smith said.

Like father, like son. James VanCallis Jr. also has a criminal record. In 2005 and 2006 he was charged with breaking and entering, and failing to pay child support.

After a preliminary hearing, Junior, 34, is charged with a long list of crimes, including first-degree murder.

The whole time VanCallis insists he's innocent, and as his defense attorney points out, there's no DNA evidence at the crime scene or on April's body linking him to the vicious murder.

Investigators never found the sneakers that made the stomp marks on April's body, but police say VanCallis's girlfriend observes something strange.

“She sees him cleaning the helmet and the shoes the night of the incident. He's cleaning them with hand sanitizer,” said Smith.

Prosecutors didn't have the sneakers, but they showed a video from VanCallis' own cell phone showing him wearing sneakers with a similar tread.

After a two-and-a-half week trial, the jury reaches a verdict: guilty.

“When we got in there we got a guilty verdict on all counts,” April's stepfather remembered. “I just wanted to scream at the top of my lungs and hooray this guy is not hurting anybody else.”

“As soon as they said, 'Guilty on all counts,' it was a bit of relief to know they got him. We got him,” April's mother said.

Jennifer Millsap finally got her day in court. Fighting back tears, she confronted her daughter's killer before his sentencing.

“Did she deserve to die? My life will never be the same. I pity you and I hate you. I can never forgive you,” she told him.

VanCallis, who has maintained his innocence, tells the judge he's been framed.

“There is no evidence that shows I've done anything wrong,” he told the court. But VanCallis's last words did not sway the judge. He was sentenced to life without parole for the murder of April Millsap.

Armada, Michigan, will forever have a hole in its heart, but this tribute to April is an attempt to begin to heal: a garden that reflects all the things she loved, including her dog, Penny.

“We all planted flowers, there's a picture of April. It just means a lot to me. She was one of my best friends. Just knowing there was a place dedicated to her makes me really happy,” her friend, Serena, said.

While April's mother, Jennifer, finds some peace there, letting go of what happened is not easy. She has her memories, and an urn of her daughter's ashes.