UPDATE May 2, 2016: Dynel Lane was sentenced to 100 years in prison for attacking a pregnant Longmont woman, then cutting her baby from her womb.

An expecting mother answers an advertisement on Craigslist for baby clothes. But when she shows up to pick up the items, she enters a living Hell on Earth.

A deranged attacker lures a young pregnant woman to her home and carves her unborn baby out of her womb. The mother-to-be survives but the baby dies.

It's a real-life horror story that happened to Michelle Wilkins.

Michelle arrived at the house of a woman named Dynel Lane on March 18, 2015, and they talked for a while. But right before Michelle left, Lane attacked her, smashing a lava-lamp over her head, knocking her out.

Lane then slices the 26-year-old from hip to hip, cutting out the unborn child.

Michelle made a desperate call to 911 from her attacker's basement bedroom, pleading for help.

It took just over six minutes for help to arrive.

Dynel's ex-boyfriend came home to find his wife covered in blood and the dead baby in the bathtub.

Dynel said she suffered a miscarriage, and they immediately leave the apartment and drive to the hospital.

Meanwhile, officers arrive to find Michelle bleeding out of her now empty womb.

Michelle clings to life, and incredibly she survives.

At the hospital Dynel Lane admits to her crime, is arrested and booked into jail. At the trial Lane's story unravels.

"We talked about having kids and she said that her tubes were tied," said Ridley.

Ridley told jurors he was shocked last spring when Lane told him she was pregnant.

Little did he know that a sinister stage was being set, an evil ploy to trick her boyfriend and the world into believing she was expecting a baby, a lie she lived for more than a year.

There are photos of Lane documenting her phony pregnancy with a fake baby bump; ultrasound pictures; even a baby shower.

Ridley and Lane opened presents and celebrated with a cake in honor of their bogus baby boy they were going to name James.

But as the due date approached, Ridley says he grew suspicious.

"She would say that she had doctors' appointments, and we would take off work and we would go and sit in these waiting rooms for a couple hours and something always went wrong," said Ridley. "She would get agitated and we would wind up leaving."

Lane claimed the due date had changed from November to late December and then to January. Finally Ridley said he arrived home one day to find the unimaginable.

"I remember when she stabbed me and then she removed it and then she continued to try to choke me," said Michelle Wilkins on the stand at Lane's trial.

"I just kept saying 'Why, why are you doing this,' that 'I don't know why you are doing this,'" said Wilkins.

"After she broke the bottle over my head and stabbed me and she was trying to choke me, I remember thinking of Aurora and feeling like I really -- I just thought of her and I felt like I wanted to survive also for her and so I fought back harder," said Wilkins.

Prosecutors say after the heinous attack Lane spent almost an hour cleaning up before going to the hospital pretending it was her stillborn baby.

Dr. Brian Nelson was on duty that day and recalled seeing the suspect in the emergency room with David Ridley.

"When I arrived Dynel and another man were sitting in chairs facing the back wall, and the man was holding the baby, weeping," said Nelson.

And a shocking detail: the doctor says he was surprised at the precision of the cuts to Michelle's womb.

"That was actually a pretty decent cesarean section. It would be somewhat consistent with a first-year intern performing their first," said Nelson.

While the drama in the courtroom unfolds, hundreds of white hearts and letters of support flood in for Michelle Wilkins.

On the second day of testimony, jurors got a glimpse of the bloody crime scene: a mattress with deep-red blood stains, glass shards from the lava lamp Lane used to smash Wilkins over the head, and the two knives caked with blood that Lane used to cut Aurora out of Wilkins's womb.

Lane sat stone faced as she was convicted of an array of charged including attempted murder.

"We the jury find the defendant, Dynel Catrece Lane, guilty of attempt to commit murder in the first degree."

After Lane's conviction, Wilkins faced the cameras, speaking to the people who loved and supported during her ordeal.

"There is nothing ever in any shape or form that can remotely prepare you for something like this," said Wilkins. "What has dominated my perspective consistently is disbelief, and words are not sufficient to describe it."

Michelle Wilkins says she's forgiven Dynel Lane and just wants to move on with her life.

"No, I do not hate Dynel, but I am angry for all of the pain she has caused," said Watkins.

Dynel Lane will be sentenced on April 29. She could face up to 140 years in prison. 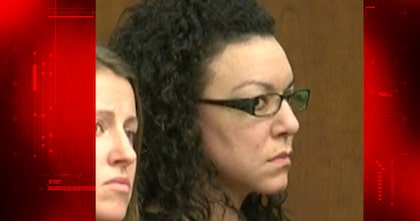 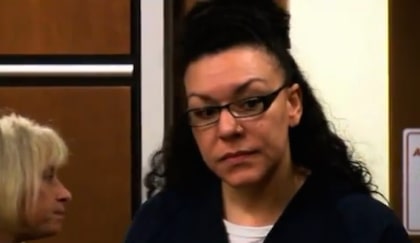