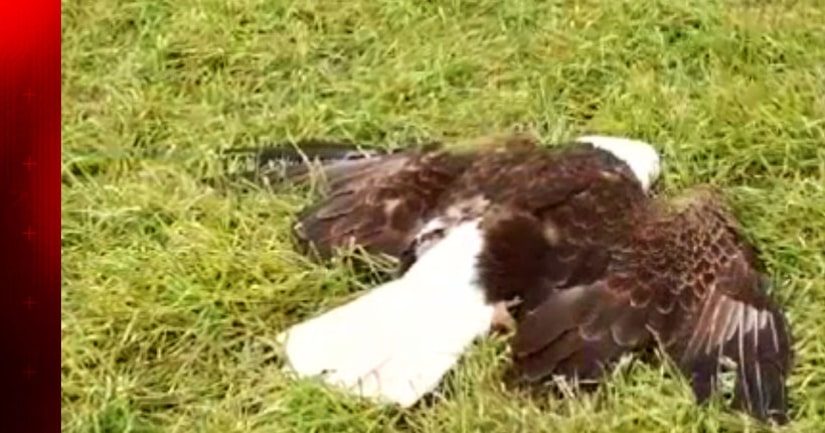 FEDERALSBURG, Md. -- (WPMI) -- The U.S. Fish and Wildlife Service and Maryland Natural Resources Police are working together on a joint investigation regarding 13 bald eagles that were found dead in the Federalsburg area on Saturday. A $10,000 reward is being offered for information leading to a conviction.

"I thought it was a turkey at first," said Glenn Breeding, who lives just down the road from where he discovered the birds. "I went up to it and moved it with my foot and realized that it was a bald eagle."

Breeding said he was looking for deer antlers on Saturday when he found four bald eagles in the grass.

Breeding wasn't the only one who made the discovery.

"The eagle was laying right there by my feet," Robert Edgell said to Breeding.

Edgell said the farm where the birds were found had been in his family for over 100 years.

"When I saw four of them, I was shocked." Edgell said. "I had never seen that many at once even flying around the farm."

Both men said the eagles were found in the grass along the edge of the woods.

Natural Resources Police said their crews spent Monday on the scene investigating. They said the birds had no signs of trauma.

"My first thought was they had been shot, but then I realized with how close they were together, I realized that was not a probability," Edgell said.

The U.S. Fish and Wildlife Service said the birds will be taken to the wildlife forensics laboratory to determine the cause of death.