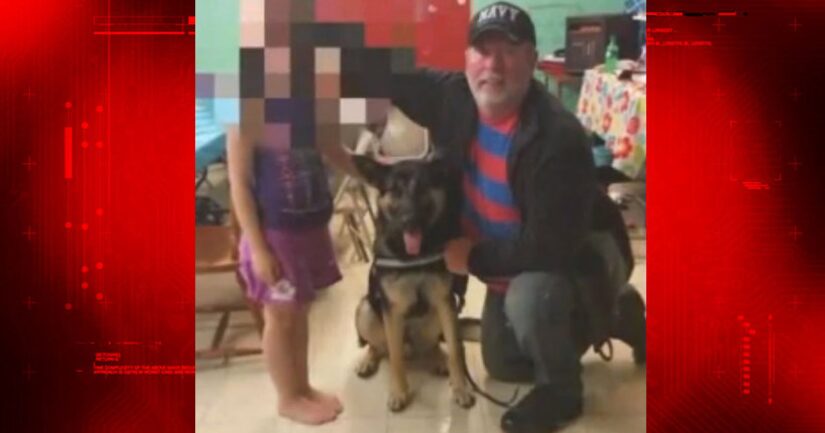 KOKOMO, Ind. -- (WXIN) -- A violent sex offender who is not allowed to go anywhere near a school is now behind bars again.

Police say Randall King used his service dog as a way to volunteer with children in Kokomo.

King is a convicted sex offender in Kokomo and Indianapolis. He was arrested last week and is accused of volunteering with a local girl scout troop and entering Elwood Hayes Elementary School four times in a span of months.

"We feel the children are safe. We are doing everything we can to work with the police," said David Barnes, Kokomo School Corporation.

Barnes says King has kids who attend the elementary school and he would regularly go inside the school to drop his kids off. He would often have his "therapy" dog with him. Court documents say the dog scared many of the children and school administrators asked him not to bring the dog inside.

King complied with the request, but he repeatedly tried volunteering at the school, according to court documents. He offered to interact with the students by bringing his "therapy" dog into the school. Barnes says the school denied his offer.

"This man was never in the building other than as a parent," said Barnes.

Although the school didn't invite King in with his dog, the local Girl Scouts troop did. King brought his dog to one of the troop meetings and he even posted pictures from that day on social media. Not only is King not allowed to volunteer or work with children, he failed to register his social media account with the sheriff's office.

The Girl Scouts of Central Indiana released the following statement:

"Girl Scouts has national procedures in place to ensure girls' safety. These procedures were followed, and this person was never left alone with girls. As soon as we became aware of this issue, we fully complied with the investigation and will continue to do so."

Although he wasn't allowed to volunteer at the school, King was invited and honored on campus during a Veterans Day ceremony. King was recognized for being a veteran with a service animal.

King bonded out of jail and the Kokomo School Corporation is in the process of filing a no-trespass order.

King is facing four level six felonies: two counts of unlawful employment near children, failure to register his social media account and entering a school as a serious sex offender.