Students at Jonathan Law High School were getting ready for prom when a young teen was found brutally stabbed to death on April 24, 2015.

Maren Sanchez, 16, was filled with life, a shining star who loved to perform in many high school projects.

And like many girls, she couldn't wait for her high school prom. But Sanchez's teenage dream was never to be.

Police say Christopher Plaskon, a former boyfriend, viciously stabbed the beloved high school student to death in front of students in the school hallway, all because she allegedly turned him down to be his date to the junior prom.

CWD UPDATE: Connecticut teen gets 25 years for stabbing classmate to death after she rejected his prom invitation

Plaskon was bitter after being jilted by Sanchez. His friends told police that he was fuming and he wanted her to pay, reportedly saying he "wouldn't mind if Maren was dead or hit by a bus."

On the morning of April 24, 2015, Plaskon allegedly approached Sanchez, threw her down the stairs and tried to choke her. Investigators say Plaskon then pulled out a kitchen knife he brought from home and stabbed her in the neck. She was hospitalized, but died less than 30 minutes later.

After the vicious attack, police arrived on the scene. Plaskon, with blood on his hands and clothes, is quoted as saying in court documents: "I did it. Just arrest me."

Plaskon, who's charged with murder, pleaded not guilty. His legal team is hoping to strike a deal claiming insanity.

According to court documents, Plaskon's attorneys say their client is mentally unstable citing a letter he wrote to his father from jail, telling him: "I hear voices in my head, and that is the reason I did what I did."

The prosecution is pushing for a conviction. If he's found guilty, Plaskon could be put away for up to 60 years.

Christopher Plaskon is back in court later this month where he is expected to take a plea deal in this case.

His lawyer said all options are on the table, including the possibility of a reduced charge of manslaughter, which carries a maximum prison term of 20 years, as opposed to the 25 to 60 years he faces now with the murder charge.

UPDATE June 6, 2016: Connecticut teen gets 25 years for stabbing classmate to death after she rejected his prom invitation

UPDATE March 7, 2016: A plea agreement has been reached that the judge has accepted. State Prosecutor Kevin Lawlor said, "The total recommended sentence would be 25 years to serve." Plaskon is scheduled to be sentenced on June 6. 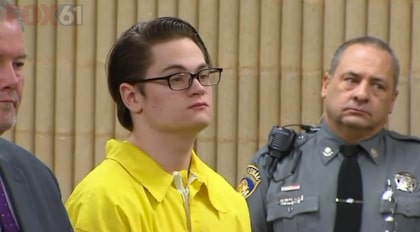