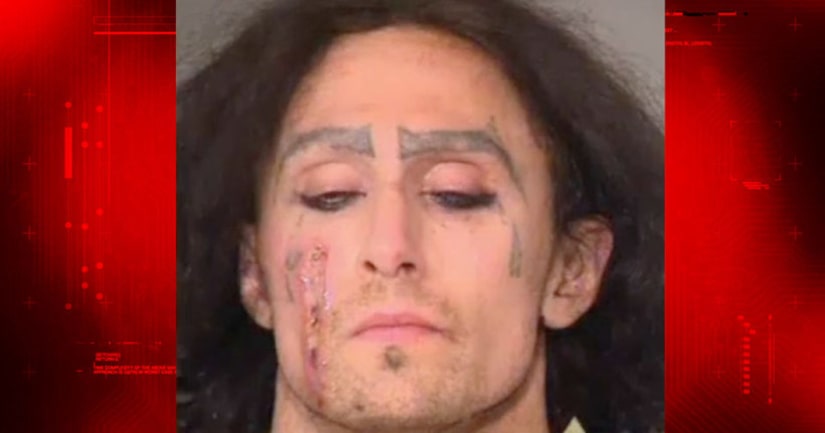 PORTLAND, Ore. -- (KCPQ) -- A wanted man on methamphetamine injected himself with more meth during a standoff in a rail car that lasted four hours in northwest Portland, according to police.

The situation began at 1:09 p.m. Saturday when police responded to a report of a man climbing on trains in the rail yard at 3930 N.W. Yeon St.

Officers arrived and contacted the suspect, later identified as 32-year-old Matthew Joseph Medlin. They said he jumped from the top of one rail car to the open bed of a dumpster-style rail car and refused to come out.

He then repeatedly picked up pieces of metal and rocks and held them as weapons, according to police.

Officers talking with Medlin learned he was under the influence of meth and had been awake for 26 hours before he went to the rail yard.

Officers said they were familiar with Medlin from previous incidents when he fought with police and was generally uncooperative.

Medlin had a felony warrant for his arrest on a parole violation.

While officers were attempting to “diffuse Medlin's agitated state,” according to police, he injected himself with more meth and began acting even more erratically.

The standoff went on four hours and lasted through a thunderstorm and hailstorm.

Officers eventually deployed less-lethal rounds and a Taser during the arrest, as Medlin was still holding his make-shift weapons, according to investigators.

Medlin was taken into custody after he dropped the weapons and was taken to a Portland hospital by ambulance for treatment.

In 2014, Medlin escaped from the Columbia River Correctional Institute just days before he was scheduled to be released. He was caught nine hours later at a Jack in the Box restaurant in north Portland.

Medlin has an extensive criminal history and is a convicted sex offender.