The "Mighty Morphin Power Rangers" were a TV and film phenomenon in the 1990s. Now, the actor who played the Red Ranger is under arrest after police say killed his roommate with a sword during an argument.

Former "Power Rangers" star Ricardo Medina Jr., 36, confessed to police he killed his roommate, Joshua Sutter. Medina told Los Angeles sheriff's deputies he did it with the kind of weapon he used on television: a samurai sword.

Medina said it started as an argument in the kitchen of the home they shared outside of Los Angeles. Medina claims he and his girlfriend retreated to his bedroom and locked the door behind them, but his enraged roommate kicked the door in.

According to the Los Angeles County Sheriff's Department, Medina grabbed his razor-sharp samurai sword from his bedside and plunged the steel blade into Sutter's abdomen, killing the 36-year-old.

Medina made the 911 call and was waiting in the driveway when sheriff's deputies arrived at the residence in Green Valley, Calif. on Jan. 31, 2015. He was arrested and charged with murder, but claims he was acting in self-defense.

"We've taken the position all along that this was never a crime," said Allen Bell, Medina's attorney.

After investigating, law enforcement claimed the evidence shows Medina may have acted in self-defense, and the former Power Ranger is released pending further investigation.

"I want to say, I'm very, very, very sorry for what occurred," Medina said at a press conference.

"He was not only defending himself, but a young lady who was an independent witness who observed the entire incident," said Bell.

"I'm very happy to be out of jail and my heart goes out to the Sutter family," Medina said.

"I think it was probably an instant thing, where he just lost it," said Kennedy. "I think even just the simple act of maybe opening his door would have made him act out in a terrible way."

Sutter's family claims there are several inconsistencies in Medina's story.

"He had 10 sharp-force injuries, when the initial reports that came out was that he was stabbed once in the chest and it came out through his back," said Rachel Kennedy, Sutter's sister. "When the coroner's report came back it was 10 times. He listed them all as defensive wounds. His hands is where most of the stab wounds were. He was fighting for his life."

"He knew that we weren't going to let this go," said Sutter's sister Sandra Vasquez.

Police re-arrested Ricardo Medina Jr., and this time they charged him with murder.

Medina maintains his innocence and is due back in court in February. If convicted, he faces up to 26 years to life in prison. 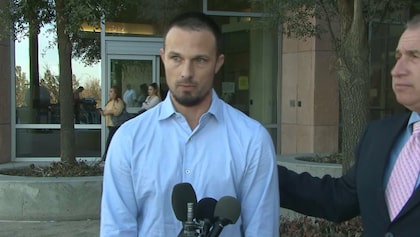