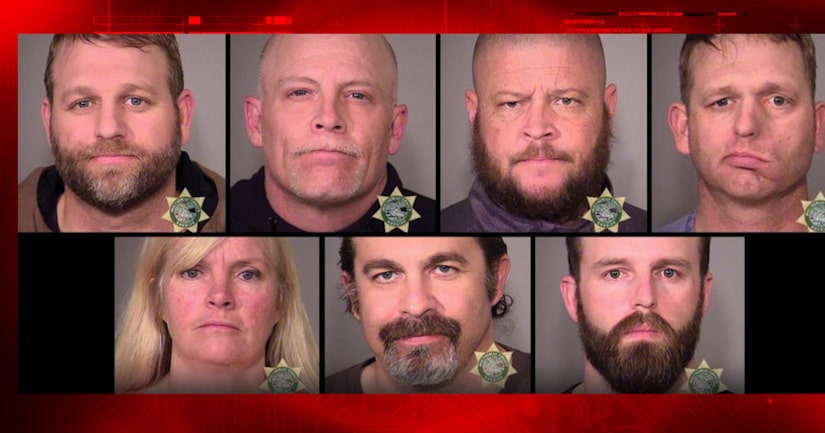 OREGON -- (KTLA) -- For 26 days, armed occupiers have been holed up in a lonely federal wildlife refuge headquarters in rural Oregon.

Dismissing the exhortations of the governor, ignoring the inconveniences of the residents, the occupiers stood their ground, saying they were protesting federal land policies.

The government waited patiently for an opportunity to end the situation peacefully. A break came Tuesday night when Ammon Bundy, the group's leader, was arrested along with six others. An eighth person turned himself in. The group's spokesman was killed.

Numbers have fluctuated since the occupation of Malheur National Wildlife Refuge headquarters began in early January.

CNN's Sara Sidner, who visited the refuge earlier this month, said she saw dozens of people there, mostly men.

After Tuesday's arrests, the usually outspoken group didn't specify how many remain. Gov. Kate Brown called for patience while officials work toward a “swift and peaceful resolution.”

Occupiers who remained Wednesday morning told journalist John Sepulvado — reporting from inside the refuge but outside the headquarters — that they planned to stay and were prepared to die.

“I just spoke to the new leaders — including Jason Patrick — They say that 5-6 (people) had a meeting, and by consensus they decided to stay,” Sepulvado wrote Wednesday morning on Twitter.

Ammon Bundy, son of Nevada rancher Cliven Bundy, had said he and others were prepared to stay in the building for days, weeks or months if necessary. They have enough food and other supplies, he said, to see them through for a long time.

The younger Bundy repeatedly warned that the armed occupiers don't intend to harm anyone but said that if law enforcement or others try to force them from the building, they would defend themselves.

On Tuesday, the group said on its unverified Facebook page that it was “at a heightened level of alert” and asked for prayers.

Why did they occupy the refuge in the first place?

First, they want the federal government to relinquish control of the wildlife refuge building so “people can reclaim their resources,” he told CNN.

And second, they want a lighter prison sentence for Dwight Hammond and his son Steven, ranchers who were convicted in 2012 of committing arson on federal lands in Oregon.

Bundy has said the Hammonds' case illustrates the government's “abuse” of power, even though the Hammonds themselves said the occupiers don't speak for them.

Protest leaders were on their way to a community meeting set up by local residents when authorities pulled them over, according to The Oregonian.

Oregon State Police troopers and the FBI arrested them during a traffic stop about 20 miles north of Burns on U.S. 395.

Two others affiliated with the group were arrested in separate incidents, and another turned himself in.

Finicum was one of the most outspoken occupiers. Earlier this month, he told CNN he'd rather be killed than arrested.

Finicum, a rancher who lived in the Kaibab Plateau area of northern Arizona, publicly stated he was no longer paying federal grazing fees. He called the fees “extortion,” The Arizona Republic reported this month.

A Facebook post on the Bundy Ranch page said that Finicum had his hands up and was shot three times. Michele Fiore, a Nevada assemblywoman and Bundy family supporter, also asserted that's what happened. Fiore told The Oregonian that Ammon Bundy called his wife from the back of a police car Tuesday night and told her that Finicum was cooperating with police when he was shot, the paper reported.

The price tag on the occupation so far is costing Oregon about $100,000 a week, the governor said. She wants reimbursement from the federal government for those mounting costs.

Then there's the legal process. All eight people arrested Tuesday face a federal felony charge relating to their occupation of the refuge: conspiracy to impede officers of the United States from discharging their official duties through the use of force, intimidation or threats, authorities said. It's unclear when they'll make their first court appearances.

Also unclear is how exactly the arrests unfolded, and who fired first.

“The situation in Harney County continues to be the subject of a federal investigation that is in progress. My highest priority is the safety of all Oregonians and their communities,” the governor said in a statement.

FULL STORY: Oregon occupation arrests: What happened and what happens next? - KTLA