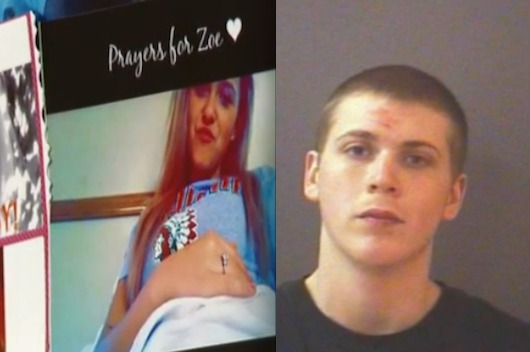 CARMEL, Ind. -- (WXIN) -- Family members of 15-year-old Zoe Coonce fight back tears as they relive the heart wrenching moment they found out the Anderson teen was in the hospital with broken bones and severe brain injuries after she was in a car that smashed into a tree going around 90 miles an hour last Saturday in Carmel.

“I never dreamed it was this bad. She had a tube coming out of her mouth, not responding or anything,” says her mom Jennifer Coonce.

Zoe was in the backseat of her grandma's Chevy Impala with friends who traveled up from Anderson for the night. Police tried to pull the car over for a traffic violation, but the driver, 19-year-old John Burge, fled from officers. Burge does not have a driver’s license.

“We have heard stories that the girls were crying and yelling, 'Stop, stop!' He just kept going,” says Zoe’s grandmother, Linda McAtee.