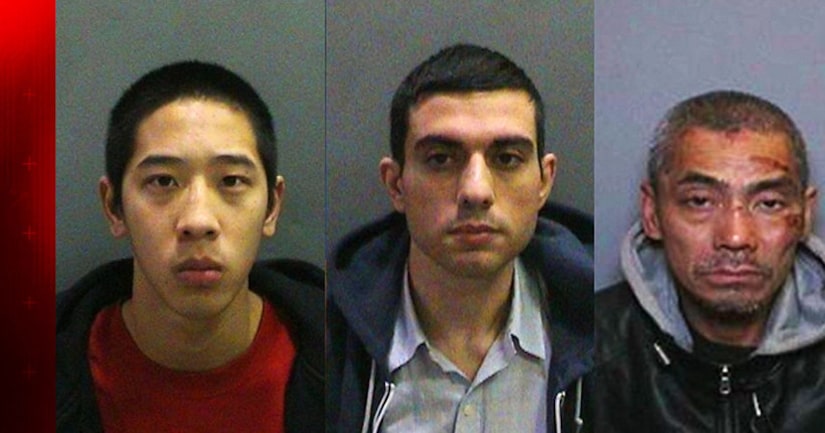 SANTA ANA, Calif. -- (KTLA) -- Three inmates who remained on the loose Monday after breaking out of a maximum-security jail in Santa Ana late last week may still be in the area and are believed to be armed, according to officials with the Orange County Sheriff's Department.

Jonathan Tieu, Hossein Nayeri, and Bac Duong, escaped from the county's Men's Jail on Friday, implementing an elaborate and “sophisticated” plan that was possibly hatched over a period of months, sheriff's officials said.

They cut through steel bars in a cell, then made their way through plumbing tunnels and on to the roof before rappelling down the side of the multistory facility using a “makeshift rope” made from sheets and possibly clothing.

A combined reward offered by the FBI and U.S. Marshals increased to up to $50,000 on Sunday as authorities pleaded for the public's help in helping them locate the three escapees.

“Presume that they are armed, and so do not approach them,” Sheriff Sandra Hutchens warned during a Sunday morning news conference. “We are asking for the public's assistance by making phone calls, calling 911 to provide us information.”

As of Monday morning, Lt. Jeff Hallock, a spokesman for the Sheriff's Department, told KTLA in an interview the three men have not been spotted since escaping.

They were last seen at 5 a.m. on Friday and authorities believed the breakout occurred a short time after that.

They weren't discovered missing, however, until 9 p.m., following the second physical inmate count of the day, which should've happened at 8 p.m. but was delayed due to a "disturbance," Hallock told reporters at a Monday morning news conference.

The incident left a deputy injured, and authorities suspect it was staged to delay the count, Hallock said.

The men have all been accused of violent crimes: Tieu faced a murder charge, while Duong was suspected in an attempted murder, according to the Sheriff's Department.