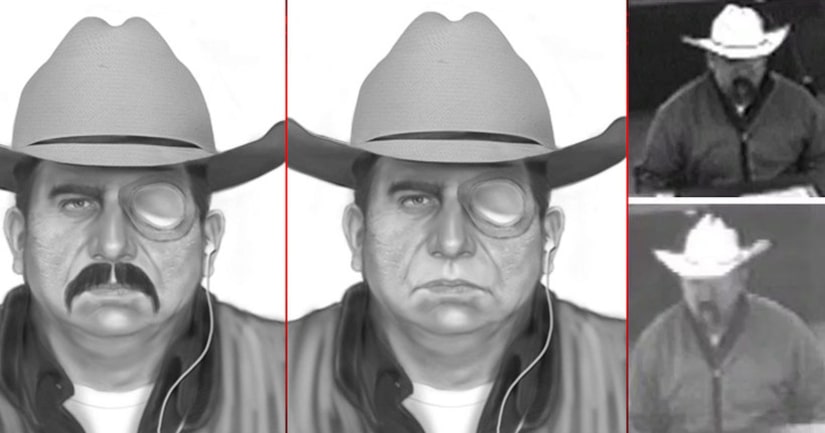 NORTH RICHLAND HILLS, Texas -- (KFOR) -- Authorities in Texas believe an Oklahoma resident may have information about one of their cold case investigations.

On March, 3, 2003, police say a heavyset white male with notable acne-like scarring on his face, wearing a fake mustache and an eye patch over his left eye robbed a bank in Watauga, Texas.

The suspect then drove away in a red Jeep Wrangler or CJ7 with a likely fictitious Louisiana paper tag.

As Officer Garner stepped off his police motorcycle, the driver of the Jeep sped away from the traffic stop and drove into a nearby field.

Officer Garner chased the suspect and when he thought the Jeep was coming to a stop, he began to dismount his motorcycle.

That is when the driver of the Jeep allegedly accelerated, drove toward the officer, drew a handgun, and began to shoot.

Despite suffering a gunshot wound to the leg, Officer Garner was able to pull his service weapon and return fire.

Thankfully, Officer Garner recovered from his injuries and still works for NRHPD.

Authorities believe the suspect was involved in at least six other bank robberies across Kansas, Oklahoma and Texas, including:

A reward up to $13,000 is being offered for information leading to the arrest of the suspect in the attempted capital murder case.

If you have any information that might assist in this investigation, please call the North Richland Hills Police Department at (817)427-7000.