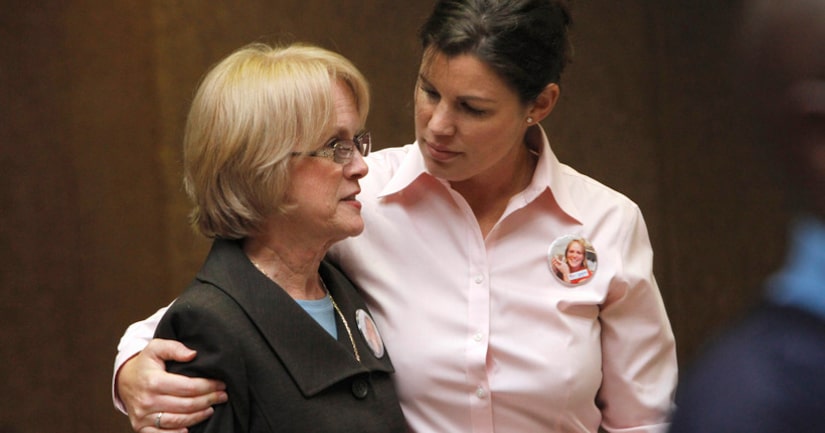 Two women found in the back of a Lululemon store. One brutally murdered, the other clinging to life. Michelle Sigona has the story.

An early Saturday morning in Bethesda, Maryland, and sheer terror lies behind a door at a local Lululemon Athletica.

Two beautiful young store clerks are on the floor – covered in blood.

Courtney Kelly was a close friend of both victims.

"Brittany was one of us: friendly face, nice person. Part of the team,” she said.

Brittany was a star athlete, winning a full college soccer scholarship … dreaming of a future as a personal trainer.

"I think of her every single day and do my best to remember the good times we had. She really was as great as they say."

"She was a silly, funny person who lit up the store. She put an awesome spirit in a room when she walked in,” Kelly said.

All of those things would be blown into oblivion that night in March 2011.

It was early Saturday morning. Author and Washington Post crime reporter Dan Morse rushed to the crime scene at the Lululemon store.

"We learned there had been an assault," he said. "There were two victims who had been employees closing up. They had been attacked and assaulted. One murdered and one at the hospital recovering."

Jayna was found beaten, stabbed and bludgeoned to death. Her lifeless body was discovered in the hallway in the back of the shop.

The details of Jayna's murder were almost unthinkable, even for veteran cops. She had endured over 300 blows.

"There came a time when they had to turn Jayna's body over and you saw her face – all these guys were silent. No one knew what to say,” Morse said.

Brittany, wounded and unconscious and restrained with Zip Ties, was recovering at the hospital

"They sounded like they wanted to rob the place ... started attacking Brittany and Jayna. Jayna gets dragged off to the back and Brittany could hear Jayna being assaulted,” Morse said.

Brittany recounts her own assault and beating to Detective Dimitry Ruvin.

"There were all these graphic details ... they sexually assault[ed] her ... used racial slurs … one of the supsects dragged her and threw her on Jayna's body ... telling her it was her fault,” Ruvin said.

The community, crushed over Jayna's death, embraced Brittany and rallied around her. To the people of this shell-shocked town, Brittany was the beacon of survival.

"Everyone thought ... we have Brittany still – let's protect her and make sure she's part of our team."

Who could have been this evil?

After combing through the crime scene and canvassing the city for suspects, police are about to make an arrest. And it's a shocker.

When investigators return to scour the crime scene they discover something is just not right – starting with the weapons used.

"All items came from the store. The suspects didn't bring their own weapons,” Det. Ruvin said. "There were shoe marks all over the store. They went in circles and went nowhere.”

Suspicious, Det. Ruvin brings Brittany in for questioning. She begins with the story of her attacker. But cops find deep holes in her story and under more pressure, she clams up.

Then, police receive shocking test results from the crime lab. Brittany lied about being raped. And it gets much worse. Detectives discover Brittany staged the entire crime scene. But why?

It turns out Brittany had been caught stealing from the store. Who caught her? You guessed it: Jayna. Brittany's dreams of becoming a personal trainer were in jeopardy.

Brittany is now behind bars serving life without parole. Jayna Murray is buried, but not forgotten.

"I think of her every single day and do my best to remember the good times we had,” Kelly said. “She really was as great as they say."