State troopers are sworn to protect and serve. But on an icy night in Castle Rock, Colorado, there was nobody to protect Trooper Jaimie Jursevics.

On a lonely road on November 15, the young mother met a violent end when she was struck and killed by a drunken driver.

A retired 27-year veteran of the United States Army Space and Missile Defense was behind the wheel of that car.

Jursevics, 33, was trying to signal retired Colonel Eric Henderson to stop when she was hit. That drunken driver took off, leaving Jursevics on the side of the road. The passenger in that car told investigators that he and Henderson were at a Denver Broncos football game. Henderson allegedly drank at least six beers before getting behind the wheel and falling asleep while driving.

That passenger reported that Henderson awoke after hearing a big "thump."

"We are grieving for the family of the trooper," said Colorado State Patrol Chief Scott Hernandez. "I hope that all of you and everyone keeps your thoughts, your thoughts and prayers for this trooper and the trooper's family."

Dozens of troopers and other law enforcement personnel remembered Trooper Jursevics by lining up beneath the United States and Colorado flags. State patrol stayed silent in an act of honor for Jaimie Jursevics as a coroner's procession carried her away.

Now Eric Henderson is behind bars, arrested on charges including vehicular homicide, careless driving causing death, and driving under the influence.

Before his legal mess Henderson was chief of the operations division of the Space and Missile Defense Command in the U.S. Army. He retired in 2013 after 27 years of military service.

Jursevics is survived by her husband and her 8-month-old daughter. 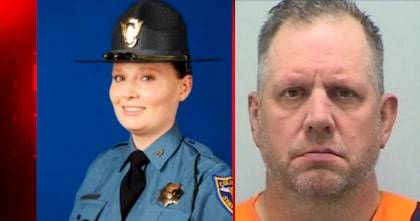 Driver arrested in death of trooper is retired Army colonel