When a loved one goes missing, family members contact local police, who create a case file. When human remains are discovered, another case file is created.

But here is the problem: Under the current system, these two files have no way of talking to each other. The information is spread across thousands of databases across the country, and families can search for years for their loved one who may have already been found.

How, in this age of high-tech forensics and DNA testing, can a person simply fall through the cracks? Crime Watch Daily investigates some surprising gaps in how missing adults are tracked in this country, shining a light on what some experts are calling a "silent mass disaster."

A mother's search for her missing son comes to a tragic end when police call to report him dead -- three years after they found his remains.

For Shelia Brown, the nightmare began long after she thought the days of worrying about her baby boy were over.

Tarik Owens was a full-grown man, and a parent himself. But even at 36, he still wasn't too old to need his mom, including on the last night she saw him alive. It was a night like hundreds of others they'd shared before. Until it wasn't.

"I went to sleep and when I woke up my door was ajar and he was gone," said Brown.

To this day, Brown has no idea where he went, or why -- just the hell that came after.

"I immediately ran outside and panic 'cause his shoes and his belongings are still there," said Brown. "I jumped in the car and drove to the police department."

Officers take a report and tell Brown they'll comb the area. Eventually, they'll even take DNA samples from Tarik's things, and from Shelia herself.

"I'm extremely hopeful at this point because once that information gets put into the system, that can get matched to a missing person," said Brown.

But for four years, not one single lead. For Shelia Brown, one of the hardest parts was trying to explain things to Tarik's kids. But then, last October, Brown received the call every parent dreads.

"Very bluntly, they said, 'May I speak to Miss Brown?' and I said 'This is she speaking,' and they said 'This is the coroner office and we have your son's remains,'" said Brown.

Words no mother should ever have to hear. But as Brown would soon learn, there was one outrageous detail the coroner's office left out.

"The next day my family, after reading the coroner report, said 'We have something else to tell you,' and I kept saying that I couldn't take no more news, and they said that they've had his body since 2011," said Brown.

As it turns out, police found Tarik's remains in a washed-out storm drain eight months after he disappeared, cause of death, undetermined. But the most unbelievable part? He was found just five blocks from Brown's home.

And she's not the only one wondering.

When Turkish expatriate Fatima Nuray moved to California, it was to make a better life for herself and her only child, Cengiz.

After graduating high school at the age of 17, Cengiz decided to take off with friends for three months to follow the Grateful Dead band.

"I gave him a ride to meet his friends and I said make sure get in touch with me, and so of course, 'Mom, I'll give you a call, let you know where I am,' and that was the last time I saw him," said Nuray.

It was April 27, 1995, the very first night of their trip. Cengiz and his friends were hanging out on the beach when he told them he was going for a walk -- he never returned.

"They looked for him, they couldn't find him, they go 'Probably he took off with somebody else," said Nuray. "His friends thought they would probably meet him at the next event, next city, that's what they thought, and continue with their journey."

More than a month later, someone finally realized Cengiz was actually missing.

"It was like in the afternoon and the phone call came and one of his friends was on the phone, I think, I go 'Oh, this is no good, why am I getting a phone call from his friend,'" said Nuray.

Realizing how much time had passed, Nuray quickly files a police report, then starts her own investigation. As the months went on, she even allowed herself to think the worst.

"I called mortuaries from San Diego to San Francisco, ask them 'Do you have anybody matching Cengiz's description?' They told me 'No, no, no, there isn't anything,' two, three different occasions," said Nuray.

Unfortunately that wasn't exactly true. In fact, just a month after Cengiz went missing, an apparently drowned body washed up on the shore not far from where he vanished. After weeks in the ocean, it was missing most of its skin, and a head.

"At that point, the coroner went about how to identify the body," said Daniel Griffee, Fatima Nuray's attorney. "There were no dental records and the fingerprinting would be suspect because of the lack of skin, and in the coroner's report they say that they took a section of my client's son's femur for DNA testing."

There was just one problem.

"Never sent them to the Department of Justice to be analyzed," said Nuray. "They just put them on a shelf."

For 19 long years, Nuray traveled up and down the coast, never knowing what really happened, but refusing to give up hope.

"It's like indescribable pain 24-7, just you try to move on keep thinking maybe he had amnesia, maybe he joined a cult," said Nuray. "Or maybe he's in jail. I would have been happy then, I knew he's alive if he's in jail."

It wasn't until just last year that she would finally learn the truth.

"A police officer in Pacific Grove was reviewing this cold case file and realized the samples the coroner had had never been delivered for DNA testing," said Griffee. "They immediately sent the samples to DOJ, did the testing and they immediate found a match."

How was it possible for two mothers' sons to stay hidden in plain sight?

Meet the woman honoring her son's memory by fighting to change the system. She's trying to solve this problem and bring families some much-needed closure.

Billboards, fliers, websites and more: When a child goes missing in America, there is no shortage of resources to help bring them home. But what happens when the missing person is a full-grown adult? It's not as clear-cut as you might think.

When an adult loved one goes missing, family members contact their local police, who then create a case file. When human remains are discovered, often by another agency, another case file is created.

CWD Infographic: What happens when an adult goes missing

These files contain vital information, often including DNA of both the missing and unidentified. But here is the problem: Under the current system, these two files have no way of talking to one another. So no matches can be made, and families are left without answers.

Families like Jan and Bill Smolinksi, who are fighting hard to change the system after learning firsthand how dysfunctional it can be.

"I am the mother of a missing and presumed murdered 31-year-old, at the time, Billy Smolinski," said Jan Smolinski.

It's been more than 10 years since Billy told his Waterbury, Connecticut neighbor he was going away for a few days, then never came back. His family has reason to believe he met with foul play after a dispute with an acquaintance. But Billy Smolinski's body has never been found. At least, as far as anyone knows.

At any given moment, there are over 40,000-60,000 unidentified human remains sitting in medical examiners' and coroners' offices across America, many of them the victims of foul play. Identifying this large number of Jon and Jane Does could mean closure for the some 110,000 unsolved missing adult cases in the country.

But because there are thousands of databases across the country, most of them closed to the public, that's easier said than done.

Even more troubling, while federal law makes it a requirement for all agencies to enter missing children into a national database, no such laws exist for missing and unidentified adults.

"So if Billy was murdered in Connecticut and his remains were in Nevada, there's no way to get the answers," said Jan Smolinski.

But the tools to help solve these difficult cases are already in place. In 2007, the free online database National Missing and Unidentified Persons System (NamUs) was created for the purpose of solving missing-person cases by opening up the files to agencies across the country, as well as the public.

"The problem is if you talk to a lot of police officers across the country especially detectives and you throw out the word 'NamUS,' they don't know what you're talking about," said Jan Smolinski. "They need to be educated to learn NamUs and to work it."

That's why in 2009, Jan and her husband Bill Senior introduced "Billy's Law," also known as the "Help Find the Missing Act."

"Billy's Law would connect the databases and have all the databases, there's NCIC and CODIS, just connect them together into one centralized database," said Jan Smolinski.

Under Billy's Law, whenever a missing person report is filed, or unidentified remains are found, regardless of what city or state, the information gets entered into NamUs, giving law enforcement and loved ones alike a place to go for answers.

While both Shelia Brown and Fatima Nuray are pursuing legal action against the agencies they feel mishandled their cases, Jan Smolinksi hopes her bipartisan bill will soon become law and help finally give families in mourning some sense of closure. 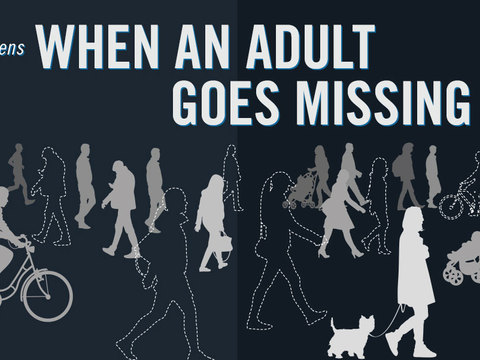