HARRISBURG, Pa. -- (WPMT) -- Pennsylvania Attorney General Kathleen Kane was thrown into the middle of the Jerry Sandusky child sex abuse scandal on Thursday, testifying in a closed-door hearing on her knowledge of potential grand jury leaks.

Kane, who appeared without counsel for the 45-minute hearing, did not offer any revelations or bombshells in her testimony, according to Sandusky's attorney Al Lindsay.

"I don't think there's going to be much impact with this session," he said. "If you're asking if this is a make-or-break session? Is this going to have a big impact on where we go with this? I don't think so."

Lindsay said he will look over the transcript of the hearing "with a fine-toothed comb" to determine if the embattled attorney general, who recently had her law license stripped after she was charged with perjury, said anything of use for Sandusky's team of lawyers.

Kane was called into the Pennsylvania Judicial Center on Thursday by Judge John Cleland to answer questions, under oath, from both he and Lindsay, on any knowledge she has on potential leaks in Sandusky's grand jury in 2011. 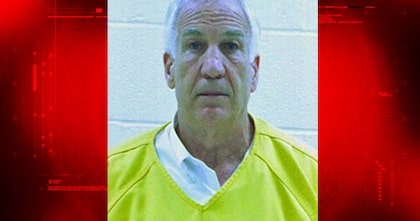