CINCINNATI -- Sam Haynes, 26, is chasing a nightmare, one of the worst days of his life flashing through his mind: His older sister Lindsey was hit by a driver high on drugs just down the same road six years ago.

Now Haynes is on a mission to get this menace off the road.

The guy who hit his sister got away with it, so Haynes wants to make sure every dangerous move one wild woman makes is caught on camera.

Haynes is terrified someone is going to die unless he stops her. He punches the pedal and pulls up, screaming for her to pull over.

Eventually the driver pulls over, and Haynes cuts her off so she can't take off. Then his fear turns to relief and compassion.

Haynes says all he was thinking about was Lindsey and wishing someone had been brave enough to stop that driver before they hit her.

When cops arrived at the scene where Haynes stopped the driver, Sandra Harris, she confessed to being high on heroin and methamphetamine.

Despite the video evidence, in court Harris pleaded not guilty. Harris even had the nerve to accuse Haynes of trying to damage her reputation by posting her wild ride on Facebook.

Sam Haynes was awarded the sheriff's highest honor, the Challenge Coin, but all he really wants is for his video and Lindsey's story to keep others from getting behind the wheel under the influence.

He says he's no hero, but don't tell that to his sister Lindsey.

"When I found out what my brother did I thought it was awesome, and he was a hero," said Lindsey. 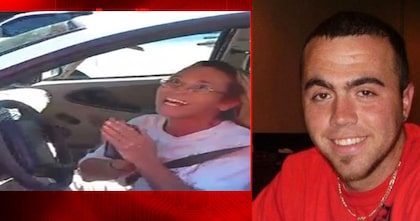