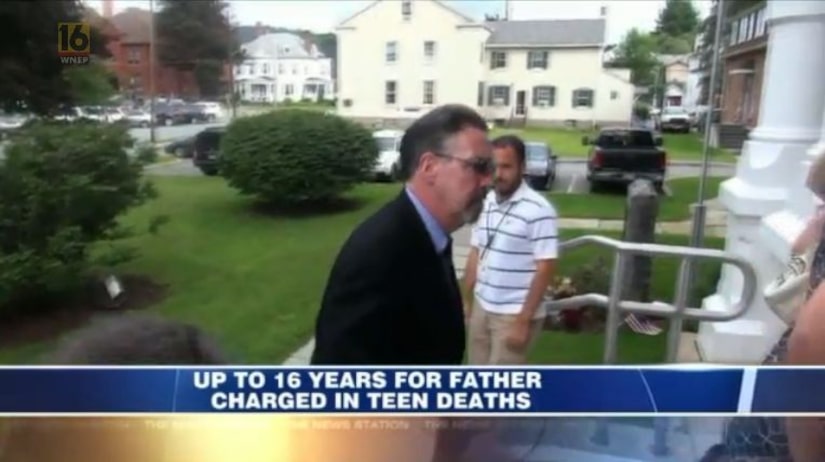 The father of an underage driver involved last summer in a fatal collision that killed three teens is facing up to 16 years behind bars, WNEP reports.

Michael Ware, of New York, pleaded guilty July 9 to three counts of involuntary manslaughter and three counts of recklessly endangering another person, according to the Wayne County District Attorney's Office.

Ware's 15-year-old daughter, Julia, was behind the wheel of his SUV with five other juveniles when the fatal crash occurred Aug. 30, 2014 near his vacation home in a Pocono resort community, a D.A. spokesperson stated in a news release.

On August 20, her father was sentenced to between six-and-a-half to 16 years in state prison by Wayne County, Pennsylvania Judge Raymond Hamill.

During his sentencing, Judge Hamill reportedly chastised Ware for endangering the lives of motorists by trying to be "the cool dad."

“The laws are in place to be followed, not to be so recklessly ignored. What's so troubling is not just that a young person ignored the law but that her parent did as well. Parenting is about making the right decisions for our children, even when that is hard to do," Wayne County District Attorney Janine Edward stated.

In a statement regarding the sentencing, Wayne County District Attorney Janine Edwards accused Ware of "recklessly" ignoring the law, leading to a "tragedy that could have been prevented."

Ware's attorney, Robert Reno, called the sentencing "inappropriate" and said he is planning an appeal.

"This is a tragedy that could have been prevented. Now there are three young lives lost and six families forever changed by one reckless and negligent father," Edwards said.

Ware faced a maximum of 21 years behind bars and $45,000 in fines before his sentencing, according to USA Today.

WNEP reports the teenager accused in the case admitted guilt in April and was sentenced to probation. She was also ordered to write an apology to the victims' families and pay thousands in restitution, according to the outlet.