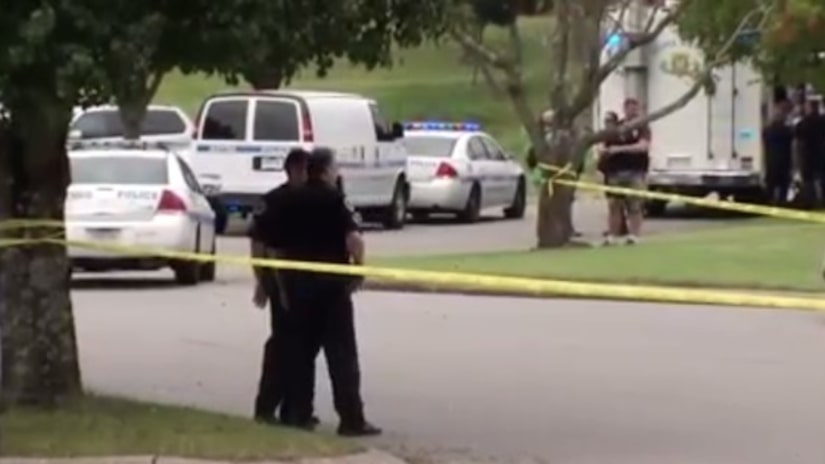 A man who walked into a movie theater in Antioch, Tennessee, allegedly wielding a gun and a hatchet, was shot dead by police on August 5. Police later determined the man's gun was an Airsoft replica.

A police spokesman on scene said an unidentified suspect armed with a gun and a hatchet walked into the Hickory Hollow Cinema in Antioch, a suburb of Nashville, shortly before 1:15 p.m. local time.

The suspect, later identified as 29-year-old Vincente Montano, entered one of the eight theaters in the complex. He is believed to have discharged a chemical irritant inside the theater, possibly pepper-spray. There were reportedly eight people in the theater at the time, including the suspect.

Police officers happened to be outside the theater attending to a traffic collision nearby; three people from the theater ran from the building toward the officers to report the attack.

One officer then entered the theater and engaged with the suspect, who reportedly shot at the officer. The officer returned fire and backed out of the room, which was heavily clouded with the chemical irritant, according to police.

SWAT officers arrived shortly thereafter and entered the theater wearing gas masks. The suspect, who was reportedly wearing a surgical mask, exited the rear of the theater, according to a police spokesman. SWAT officers outside the theater confronted and then fatally shot the suspect. Police confirmed the suspect was dead within an hour of the beginning of the incident.

A hazardous-devices team was on scene investigating the two backpacks or satchels brought there by the suspect. The suspect was wearing a backpack on his chest, according to Metropolitan Police Spokesman Don Aaron.

The bomb squad detonated at least one of the bags during the ensuing investigation at the scene.

Nashville Fire Department Spokesman Brian Haas said the three patients were treated at the scene. No one was hospitalized.

A 58-year-old man was treated for pepper-spray exposure and a "superficial" cut or bruise on the shoulder or arm from what may have been a hatchet or ax. A 53-year-old woman and 17-year-old girl were treated for exposure to pepper-spray.

The man who sustained the injury from the alleged hatchet or ax spoke to reporters after the incident. He only wanted to be identified as "Steven." He praised the Metropolitan Police Department for their speedy handling of the situation and said he was thankful that no one other than the perpetrator was hurt. He said he and his family were not prepared and did not want any fame or attention as a result of the incident.

According Aaron, Montano had previously been committed four times. He had been reported as a missing person by Murfreesboro Police two days prior to the theater incident.

Earlier in the day, police initially described the suspect as a 51-year-old local white man. The suspect was later identified as Montano, 29.